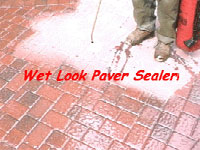 Brick Paver Sealers are different than regular concrete sealers in that they:

Unfortunately, Brick Paver and Decorative Concrete Sealers sometimes fail by discoloring and turning milky white or yellow in color. Typically this happens for one of these reasons:

In many cases applying a solvent to the pavers will "reset" the sealer, making the white haze disappear. This usually works for trapped moisture and if you have sealer buildup. Unfortunately, if the white haze is from something else then you will need to strip off all of the old sealer and start over. This is not a fun process but it is better than replacing everything!

If you plan on resealing the pavers it is best to remove as much as possible of the old sealer. If you do not there is a strong chance that the "white haze" will come back in those areas.

The Brick Paver Sealers we sell are not prone to discoloring when used on concrete that is free of any old sealers. Main reason is that they are all "breathable" sealers which greatly reduces any chance of the dreaded "white haze".

If you have any questions please ask below.